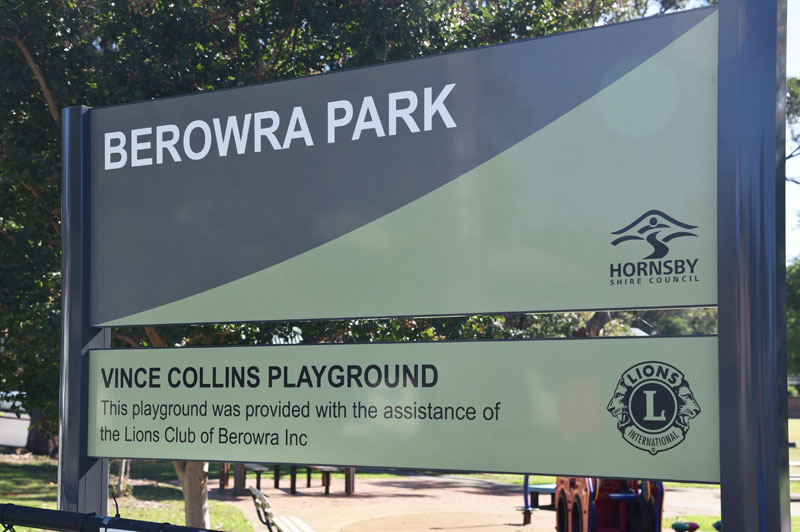 Today, after many years without any identification, Berowra Park reclaimed its identity. This afternoon, a replacement sign was put in place, the first in the region using the new Hornsby Shire signage scheme.

Originally built in 1973, the playgound was a much needed addition to the area and especially to Berowra Park as it tidied up a disused corner of the park.  The Berowra Lions Club of the day worked together to prepare the area, and with the help of Hornsby Council provided a much needed play area for the children of Berowra. It is called the Vince Collins Playground because Vince was a member of the Lions Club at the time who was instrumental in its creation. He was also very well known in the Berowra community, and was one of the founders of the Berowra volunteer fire brigade. The park used to be known as "Berowra Lions Park", however when Vince passed away, in recognition of his work in the community the park was renamed the Vince Collins Memorial Park. Hornsby Council assisted with the upgrade to the original sign.

However, some years later, when the park underwent an upgrade by Council with the introduction of soft surfacing under the equipment, the sign was removed during the renovations. No one is really sure what happened to the sign but it was never replaced. However, many years later, and with the help of the Hornsby Council Parks, Trees and Recreation team, the sign has been replaced and the name upgraded to the Vince Collins Playground. Thank you to everyone concerned who made the replacement of the sign possible.

Berowra Lions Bruce Andrews, Les Howe and Brian Engert were all on hand to witness the replacement of the Berowra Park Sign