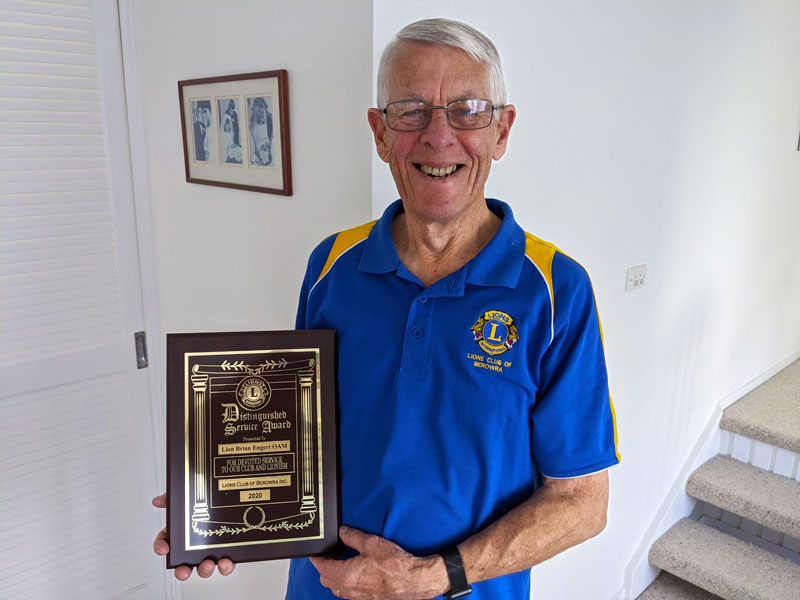 In a year full of club members doing the extraordinary, the Lions Club of Berowra was delighted to present Lion Brian Engert OAM with the Lions Distinguished Service Award.

For someone who absolutely loves doing what he does, whether its out supporting the community through Lions, Hornsby Connect, building a web site, or being with his children and grandchildren, Lion Brian Engert does not do things by halves.

Brian is another who has given the club sterling service over many years, and who has again excelled this past year. Brian has previously served 6 terms as President, beginning in 2005-06, as well as serving in various other roles. Most notable of these has been his ongoing management of the club website, which he designed, built and hosted, and he also set up and managed the club Twitter account. This year, during COVID-19 he completely revamped and rebuilt the club website to modern standards, adding many new features along the way (including an ability to accept donations), and there is still more that he wants to do. Our website is now a standout of its type – to the extent that other clubs are looking to copy it. Brian is another outstanding example of what it is to be a Lion, and we are very fortunate to have him in the club.

We are pleased to announce that Bran has been awarded the Lions Club of Berowra Distinguished Service Award. In accepting the award, Brian, ever the humble man, said “It’s strange receiving awards, while doing something that I just love doing.”