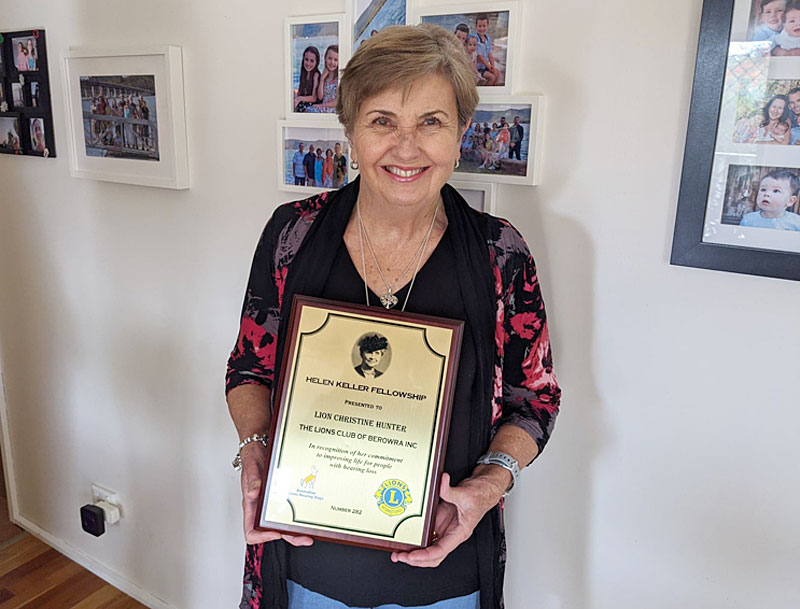 Long term club member, Lion Christine Hunter, was recently presented with the Lions Helen Keller Fellowship in recognition of her committment to improving the lives of those with hearing difficulties.

If you ask her, Chis Hunter would tell you that she doesn't do much. But you don't have to dig very deep to find that the truth is very different from her perception.

Chris, an advocate for those with hearing difficulties, incurred hearing loss of her own as a result of a childhood illness, the severity of which was not immediately noticed. It held her back until she was pushed by a relative to obtain a hearing aid when in her early 30s.

She then went on to resume further study followed by a very successful teaching career. Following retirement from teaching Chris became a volunteer for Self Help for Hard of Hearing People (SHHH) in 2013. She was invited to join the Board in 2015 & was elected to her current role as President in 2016.

Together with husband Colin, she now also prepares the organisation’s quarterly magazine. Chris continues to do presentations to community groups, government agencies and private companies; while also providing peer support and counselling to people with hearing loss. She has written and presented submissions to parliamentary inquiries into hearing health, and has been engaged in consultations with the NDIA in relation to the NDIS’s treatment of hearing disability. She has also been an active participant & research partner in a range of hearing research projects.

Chris led the move to rename and rebrand SHHH to become Hearing Matters Australia (HMA), believing that it was more relevant to the times. She represents the peak hearing consumer advocacy body Deafness Forum Australia on the Transport for NSW Accessible Transport Advisory Committee (ATAC), and has advised other NSW government agencies such as the NSW Electoral Commission & the State Insurance Regulatory Authority (SIRA) on hearing accessibility issues.

In 2018 she was elected to the Board of the Australian Federation of Disability Organisations (AFDO), again representing Deafness Forum. This role was taking her to Melbourne on a regular basis before COVID-19 arrived. Chris has partnered HMA with a Danish research body called the Ida Institute which is an independent, non-profit organisation working to integrate person-centred care in hearing rehabilitation. As part of Ida’s Person Centred Hearing Network (PCHN) she is engaged in an international collaboration aimed at influencing & supporting culture change in the field of hearing care & promoting a hearing care delivery model focused more on the needs of the individual. She has travelled to Denmark twice in this role, most recently in 2019.

The Lions Club of Berowra is extremely proud of her achievements and is very pleased to be able to present her with this award.