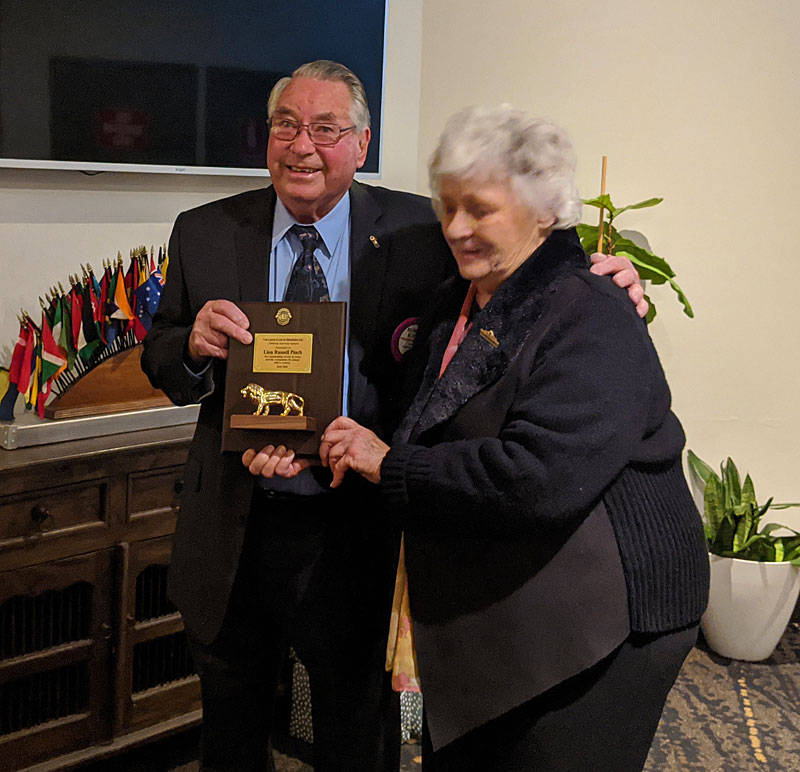 The Lions Club of Berowra's longest serving Lion, Russell Pinch, was awarded one of the club's highest honours – the Lions Lifetime Service Award – for his enormous contribution to Lions and Lionism.

Russell Pinch - always supported by his wife Gay - has provided a lifetime of service to Lions and to the wider community. He was honoured at the club's recent changeover dinner with the Lions Lifetime Service Award.

Joining Lions in 1977 with the Lions Club of Hornsby - after an introduction by Barry Thompson - Russell has been a highly active member of Lions ever since. He was Hornsby Club President in 1981-82, and also participated at Zone level – serving at least 4 terms as Zone Chairman, Regional – as Regional Chairman and District levels over that time.

Russell - usually accompanied by wife Gay - spent many years involved with an Arts and Crafts stall at Hornsby Hospital, with all proceeds going to the Hospital.

Russell was a carpenter on the artisan staff of Hornsby Council, and worked with former Lion, the late Derek Hurdman, building shelves for the Berowra Toy Library on a couple of occasions. He has long been a woodturner - Barry Palmer often had him turn pens and other items for Barry to take as gifts on his Lions tours overseas.

He transferred to the Lions Club of Berowra at a time when the club was looking like it was going to fold. Russell rebuilt the club, and without him, it is doubtful that this club would even exist, let alone be the vital and thriving club that it is today. He served two terms as President of the Berowra Club, from 2003 – 2005.

Russell and Gay were an active part of the Sydney 88 group that organised tours in conjunction with Lions conventions. Russell would always do the heavy lifting, getting bags on and off the bus wherever they went. He has been this club’s representative at conventions numerous times, and the two have travelled to Norfolk Island on Lions business on at least 19 occasions.

Russell and Gay were both heavily involved with the Cord Blood Project that became the Lions Childhood Cancer Foundation. The two also have a passion for youth, having had extensive involvement in Youth Exchange in the past, and Russell also served several terms as District Leo Chairman.

Another big passion for both of them has been eye health. They have been actively involved in the collection of used spectacles for decades, shipping them to Queensland for them to be repurposed and donated to people who otherwise could not afford glasses – something that our club is now doing again. Russell was also heavily involved in a Sight First campaign in 1993-94, and the Lions Eye Health Program.

Russell has previously been honoured with a Melvin Jones Fellowship, a Progressive Melvin Jones Fellowship, and a Bob Coulthard Award (for his services to sight and vision for Lions). Russell is looked up to by all members of the Lions Club of Berowra as someone that has been - and continues to be - relied upon for his advice and direction. Our congratulations to Russell on this recognition.